An exceptional architectural heritage offering classified Historical Monuments and chateaus that need no introduction: discover the magic of the Margaux Tourism. 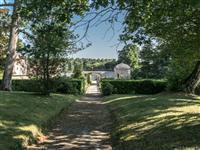 The château was built in 1878 by André Delbos, the current owner's great grandfather, following the plans of the bordelaise architect Henri Duphot after his tour of England and Ireland. The eight hectares of parkland nestling in the heart of a 380 hectare estate abounds in hidden wealth : a vegetable garden, a flower garden, and Dutch greenhouses. The flower garden was an indispensable partner to the vegetable garden, which no longer exists. The Dutch greenhouses were used for horticultural graphting and to keep a floral production all year round. It included : a rose garden, decorative flowers and scented plants.

Few sights are more beautiful: a sumptuous carriage swiftly drawn by majestic horses... This is the perfect place to revisit the bygone memories of a very different age. The Chateau Lanessan's former stables are very much part of the region's fascinating history. The buildings tell of the indelible link that has always existed between the chateau's owners and their horses. The chateau's magnificent horseshoe-shaped stables were built in 1880, at the behest of André Delbos. The stables have since been converted into a horse museum, allowing a wide audience to appreciate the natural beauty of the estate's vines and gardens. 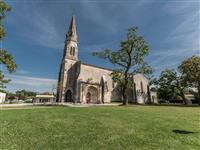 Classified as a historical monument (with the exception of its southern doorway), Arsac's Saint-Germain church is a fine example of the Roman architectural style. Built on twelfth century foundations, the church's monumental porch is beautifully preserved: the unique, finely crafted five-arch doorway belongs to the original edifice. Inside, the protected decor is exquisite, with a superb Madonna and Child in gilded wood accentuating the exquisite form of the adjacent 18th century altar and reredos, sculpted in wood. Funerary inscriptions dating back to the 14th and 15th centuries line the walls, with ornamental paintings decorated with noble insignia. The church tells the story of the noblemen whose influence is still apparent today, all over the Medoc. 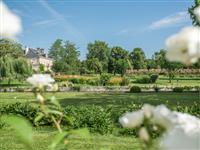 Kirwan and its 2 hectares of grounds, which has been a wine-producing château since the 17th century, was developed considerably when it was owned by the Godard family. Romantic grounds, magnificent rose garden, arbour along the fish pond, ancient trees (Southern magnolia, majestic plane trees). 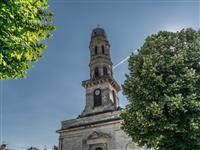 Watching over a vast territory from four lofty bull's eye windows, the Dôme de Lamarque is the region's sentinel. From one side of the tower, visitors enjoy views of the Gironde estuary and its isles, and of the regions world-renowned chateaus and winegrowing properties from the other. The village of Lamarque is the gateway to the Medoc (located only a few minutes from Blaye), and its famous dome is its soaring watchman. The imposing tower can be seen from miles around. The dome, attached to the Saint-Seurin church, is itself a remarkable edifice: charming, original architecture rises from the spiral motifs and unique staircase at its base. Each of the tower's floors has its own marvels to discover, before visitors are left awestruck by the magnificent panoramic views at its summit. 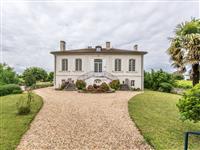 On the waterside path that stretches down from Macau, visitors' gaze is drawn from the natural havens on the banks of the Garonne, to the beautiful residences opposite. The ever-changing landscape offers worm's-eye views of the estuary, the bec d'Ambès, the timeless isles that emerge from the estuary currents, and the region's vast agricultural estates and chartreuses. These charming buildings, naturally facing the estuary, are typical of the Gascony region. Their ornate façades are a delight to discover. In the blink of an eye, visitors are transported back to the 18th or 19th century, when the chartreuses were built as waterside retreats for wealthy Bordeaux wine traders. 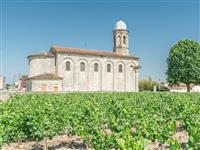 Although the church in its current form was not built until the 19th century, the history of Notre-Dame d'Arcins stretches back far further to the era of the Knights Templar, at whose behest the first church was built here in 1300. The historic Knights were also behind one of the first vineyards in the Haut-Médoc, at Chateau d'Arcins. The village of Arcins itself was once a Commandery of the Order of Malta, otherwise known as the Knights Hospitalier (it is believed that this fabled group founded the local parish). After the church in its original form was destroyed, the neo-classical edifice we see today was eventually rebuilt during the reign of Louis-Philippe. Inside the church, visitors marvel at a distinctive barrel vault, alongside a magnificent, and relatively recent, statue of Saint Roch.

It is said that the village of Labarde takes its name from the medieval bards, who once passed through the village singing their knightly epics. Others believe that the village is named after its famous larks (from the word bardala, meaning lark). The Saint-Martin church was built in the eighteenth century, on the medieval foundations of the millinery "de La Naude". Here, visitors follow in the footsteps of the Abbot Berland, who ordered the church's construction. Visitors contemplate the bold lines of this elegantly sculpted edifice, with its elegant double-arched bell tower. Inside the church, visitors find a magnificent 16th century Pietà in polychrome wood, decorated with heraldry, alongside a 17th century Christ figure, and a great painting of St Martin which dates back to the eighteenth century. 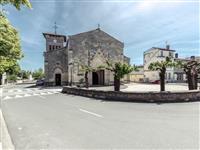 The village of Macau is blessed with a magnificent architectural heritage: chateaus, churches, a pretty old town, and a traditional port. The village, which dates back to the Gallo-Roman period, is a wonderful holiday destination, with so much to discover. Visitors to its unique church marvel at its Roman-style bell-tower, which dates back to the twelfth century. Classified as a historical monument, the fortified square tower reveals the building's medieval origins, constructed according to plans laid out by the Abbot Foulques (a well-known Medoc architect). The churches interior exhibits a Latin Cross ground plan, and a characteristic ogival vault. It is said that a secret tunnel runs from the church to the Chateau de Gironville: wall sections have been discovered in neighbouring vineyards. 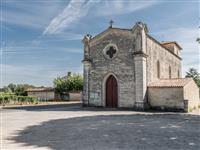 Perched on the top of a high mound for what seems like forever, the Saint-Seurin church has watched over the surrounding centuries-old chateaus and their rows of vines... Visitors are taken on a journey through the centuries, beginning in the Early Middle Ages: this Roman-style church was built in the 12th century. Despite a few renovations, the building remains a privileged witness to the many upheavals that have marked the village's long history. In its ogival vault, time stands still: visitors discover the remains of funerary inscriptions (in homage to the Lord in the Alesme family). Unsurprisingly, its imposing rectangular bell tower and eastern end, ornately decorated with magnificent Romanesque-era sculptures, are classified as historical monuments. Its nave was added in 1843, and its bell was cast in 1780...

123
90
8
19592
We are using cookies to guarantee you the best experience on our site. If you keep using the latter, we will consider that you accept the use of cookies.OK